Speech:/ the antler of the mind
(Robert Bringhurst – ‘A Quadratic Equation’)

I admired his cap of antlers –
ideas forking from his scalp,
yet struggled with his voice,
which bellowed like a stag.

They studied his awkward gait,
his upright stance, his lack
of language. And like a preacher,
he didn’t know how to listen.
I wanted to hear what they knew
about the quality of tundra
the taste of cloudburst berries;
what deer feel about snow.

I saw a herd, splodgy brown,
reverse freckles. Unafraid.
They scented me, trotted off –
a force of winter forest –

ideas intact, their knowledge
still out of my grasp. Yet,
like meeting someone famous,
what would I have said? 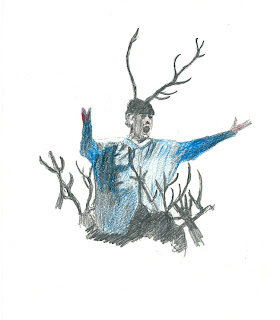 What the Crocodile Taught Me

I swooned at the large god of him, sunning,
a tooth for every day of my life.
He performed his run along the bank,
as males do. I brought my boat closer,
he took to following, at a distance.

I wasn’t taken in, knew his four-chambered heart
could pump love out and in, in and out,
knew his tongue had few good uses,
knew all about his grin. Whoever said he was cold-
blooded has never truly known this beast.

He brought out the prehistoric in me. I dived.
We swam, belly to belly, swam to where the Niles meet,
tussled as we thrashed among the weeds. After, I lay
the length of him, a limestone lilo, studs patterning
my skin. He smiled at me, often. Taught me all he knew.

Years later, when a man tried to drag me under,
I practised the force my lover had held back –
levered my small jaws open to their fullest extent,
splashed them down on the human’s arm.
My attacker still carries the mark of my smile.

Katrina Naomi
Posted by Tim Ridley at 05:15 No comments: 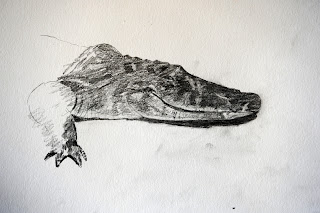 This was a difficult couple of weeks for me. Music and particular punk are very important to me, they pulled me into art and adulthood. Critical distance is important, but Katrina's poem was a challenge which I wanted to take on. Since Peter Saville designed the Unknown pleasures album cover and Jamie Reid made cut ups Punks means of communication I was never going to look at the world in the same way. Punk and its consequent waves of influence, and our early relationship are forever entwined.
Posted by Tim Ridley at 03:58 1 comment:

Punk’s gobby charm largely passed me by,
lost in a chasm between disco and metal.

I’ll admit to a headbanger award at Dreamland,
(a 50’s frock in a sea of denim), split ends thrashing

to Mötorhead’s Overkill; yet, still too shy
to compete as a disco champ, unlike Emin.

And while I flitted between the pages of Sounds,
you were NME. I shouldn’t sneer; we got together

to Smash It Up, never to be DLT’s kind of couple.
And while I loved the women’s spikes and chains,

who could afford ‘Sex’ on the Kings Road?
And I saw Rotten once with PIL (so much better

than the Pistols) he walked off after 20 minutes.
I disliked him then and now. This is heresy to you,

with your three pairs of bondage trousers,
your home-stencilled Combat shirts –

I knew no one like you in Margate. And now,
Reid’s pins hold a number to a marathon vest,

a safety pin through your lapel. And while I dance
to Sister Sledge, I’ll loosen my hair for the Sabbath.